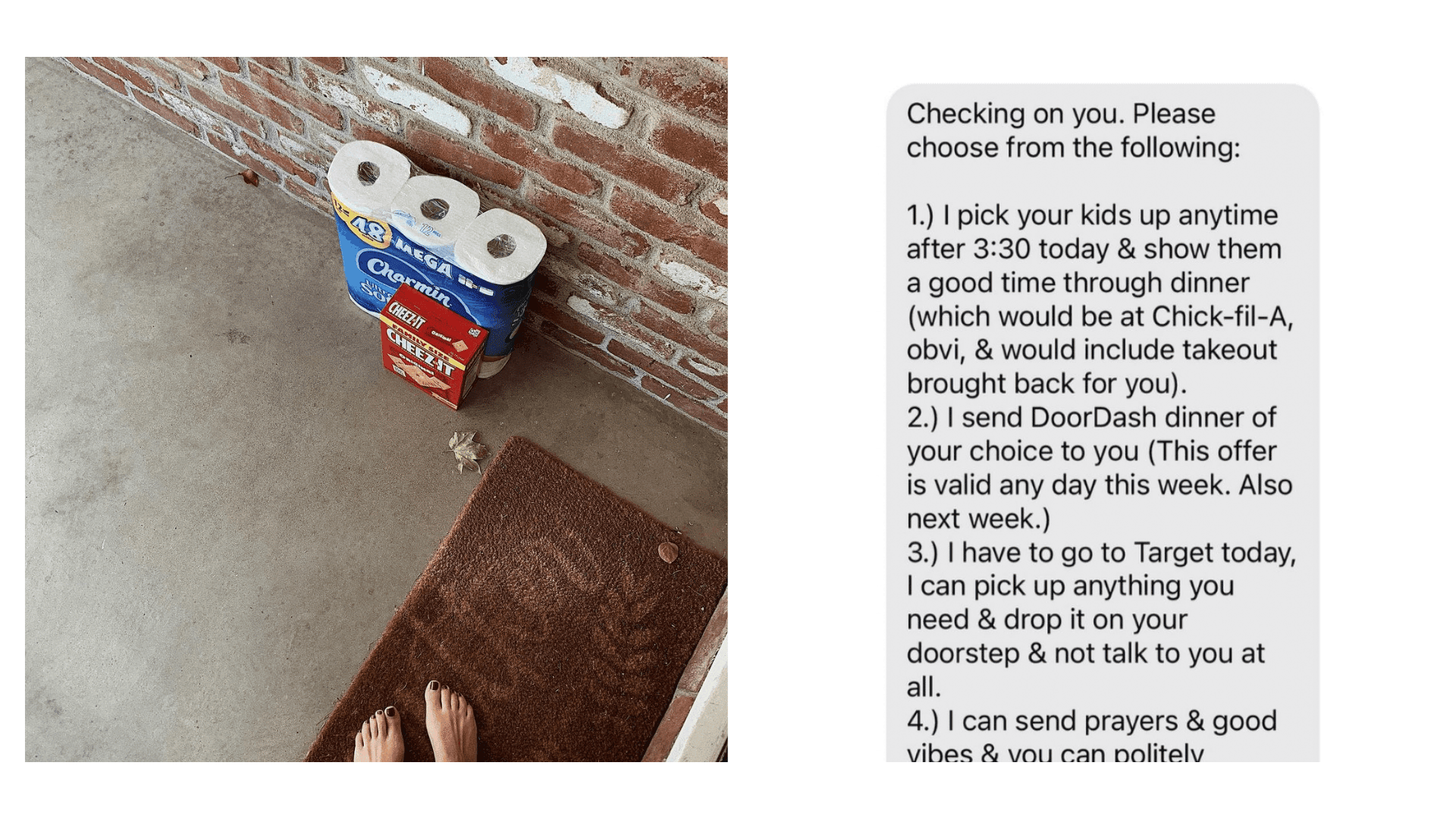 When Ashlee Gadd experienced a miscarriage, a good friend of hers showed up for her in a simple yet beautiful way. In a now-viral Instagram post, Gadd shared what friendship amid a miscarriage looks like—and it’s resonating with moms everywhere.

Initially in the first photo, you see some toilet paper and a box of Cheez-Its. Maybe it doesn’t seem like much, but to Gadd, those tokens of care and the messages that came with it meant everything.

Gadd’s friend, Anna Quinlan, sent her a text that included four options for help and Gadd had to choose one. If you scroll through the photos in the slideshow, you’ll see the options included everything from allowing Quinlan to pick up Gadd’s children from school or grabbing anything she needed from Target to having dinner delivered, and also allowing the option of “politely declining” her offer to help.

Gadd responded with a photo of a half-roll of toilet paper.

“Would you believe me if I told you this is all of the toilet paper in my entire house right now?” she texted back to her friend. “Would gladly take you up on the target offer — we need toilet paper. You’d be saving me a trip.”

Gadd also requested Cheez-Its (regular flavor, not White Cheddar) from her friend. Two everyday items that carried a lot of weight for her while she was, as she described to TODAY, still “grieving and bleeding.”

Quinlan told TODAY that when she has a friend who is suffering or struggling, she thinks tries to be helpful in a resourceful way.

“I know that Ashlee has other friends who can offer totally different resources, like sharing their own vulnerable stories of miscarriage or offering beautiful flowers or gifts,” Quinlan said. “I’m not as great at those resources, but I can drop toilet paper and crackers on your porch by 3 p.m.”

Gadd who is also the founder of motherhood collective Coffee + Crumbs, says the text was exactly what she needed during her time of loss.

“More often than not, I think most of us default to, ‘Let me know if you need anything’,” she told TODAY. “I’ll speak for myself — I’ve sent that text a hundred times. She gave me something tangible to grab onto, without the emotional fatigue of trying to think of what I needed.”

We’ve all done it—asked our friends to let us know if they need anything. And while it’s always said in earnest, putting the burden of reaching out for help isn’t always, well, helpful.

An actionable response like this one is so simple yet so impactful. It’s also a great lesson on friendship, and all the different ways we can show up for those we love.

Maternal anemia during pregnancy may increase risk of childhood anemia
15 Best Matching Games And Activities For Toddlers
Can You Eat Sushi when Breastfeeding?
Researchers report increase in the number of children with autism spectrum disorder
Study shows long-term safety and biologic activity of golodirsen in DMD patients