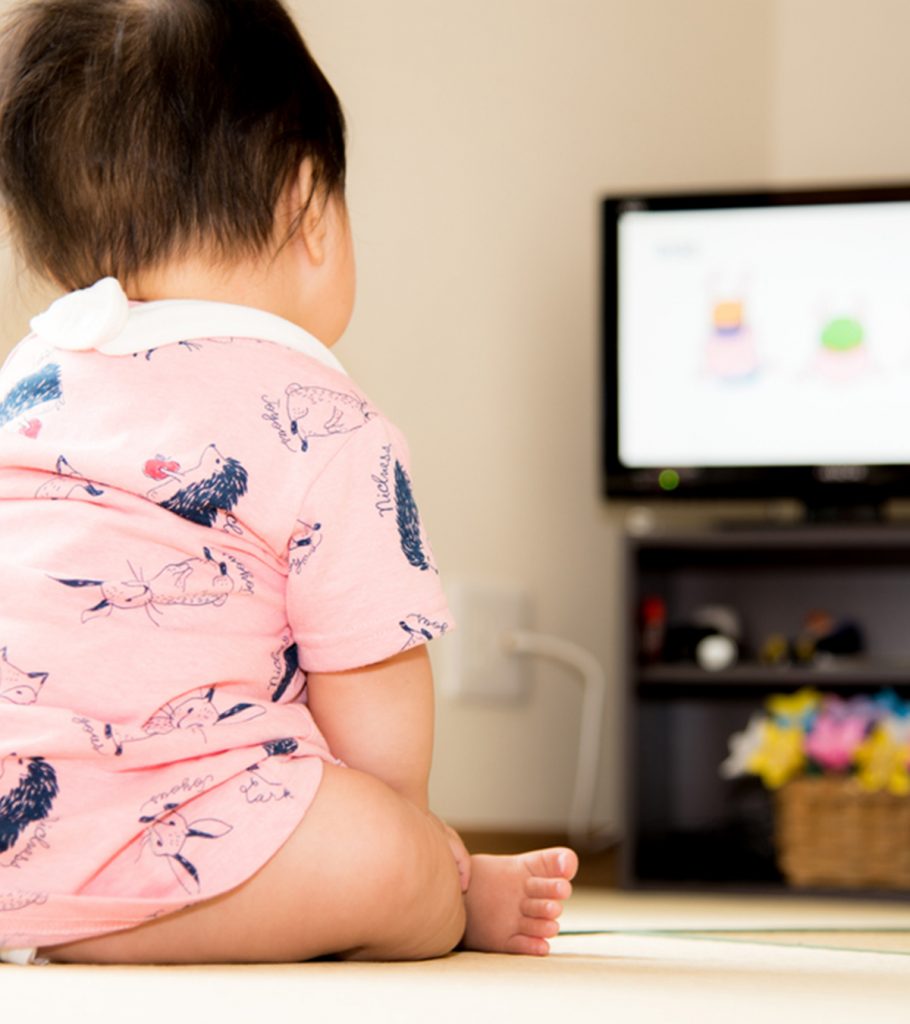 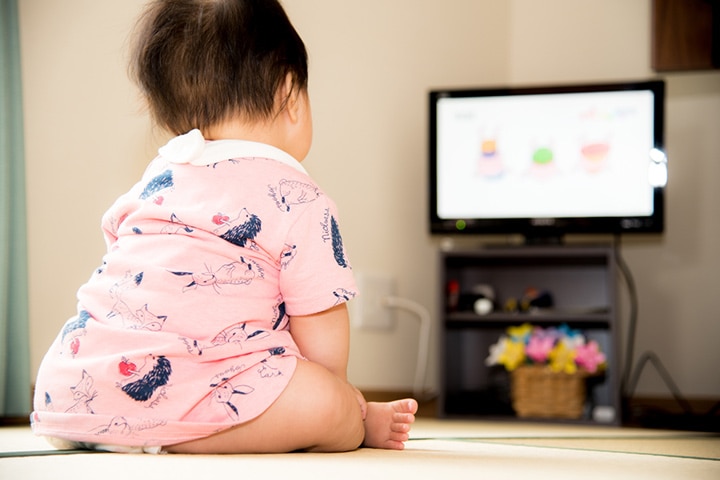 Television is ubiquitous, and each home has at least one television. Despite all your efforts, your baby will invariably be exposed to a TV. Infants and toddlers are impressionable and could be easily enticed by the colorful, bright images on the TV. Before you know it, your baby might be addicted to it, making a TV vital for engaging the baby during essential tasks, such as feeding and changing diapers.

Television-watching among infants is a growing concern among parents and experts since the activity offers no useful exercise or skills to a little one. But how does TV-watching affect a baby? Read on to learn about the effects of watching TV on babies and alternatives that could help lead the baby away from the device.

Is It Okay For A Baby To Watch TV?

The American Academy of Pediatrics recommends no screen time for babies younger than 18 months (1). Thus, infants should not watch television and even other devices with a screen, such as smartphones and tablets. Television-watching is not recommended for older babies and toddlers, too.

Toddlers between 18 and 24 months may use high-quality educational apps on smartphones or tablets with their parents for a few minutes a day. Children older than two years may try high-quality apps for no more than an hour a day.

Effects Of Watching TV On Babies

Watching television offers no benefit to the baby since they are too young to understand the images seen on the television. Babies watch TV because they find the bright and colorful images attractive. They cannot understand and identify the real-world equivalent of the TV’s images. For instance, a baby may see a TV advertisement of a toy, which they already have. However, they will not realize that it is the same toy they have in their hands.

Regular television-watching may cause the baby to focus predominantly on the television content, causing them to overlook real-world activities. It may affect brain development in the long run. Research indicates that television-watching offers no cognitive benefit to the baby, and there is no reason to let your baby watch television (2).

According to the American Academy of Pediatrics, on average, a parent speaks 940 words per hour when playing with their toddler. However, the number decreases to 770 just by switching on the television in the background with no one watching it (3). Therefore, the number of words you speak to your baby could significantly decrease if your baby is engrossed in watching television. The effect could be multi-fold if your baby spends a major part of their waking hours watching TV.

Babies learn the best when they interact with their parents and other caregivers. However, TV could take away the time, which could have been used in improving their language skills, affecting the baby’s speech and language skills eventually.

Children tend to blink less often than adults when watching television (4). Constant staring at the TV may cause eye pain, eye redness, and blurred vision. Your baby’s eyes are also constantly focused on TV images closer to them. It may make it difficult to focus on distant objects immediately, and the eyes may take several hours to re-adjust (5).

Regular television-watching could exacerbate all the short-term eye and visions problems. It may increase the risk of the baby developing myopia (nearsightedness) early in life, making it imperative to wear prescription glasses (6).

According to Frederick Zimmerman, Associate Professor of Health Services, University of Washington, “Exposure to TV takes time away from more developmentally appropriate activities such as a parent or adult caregiver and an infant engaging in free play with dolls, blocks or cars.”

The more your baby watches television, the less time you get for games and activities that exercise and improve a baby’s developmental milestones. Your baby will learn a lot more from your facial expressions, tone of voice, and body language than they can learn from television (7).

Research indicates that eating while watching TV may interfere with the brain’s ability to realize satiety, causing overeating. However, some children may eat less than needed due to the distraction caused by a television (9). Although there are no specific studies on babies, it may lead to similar results, especially in older babies who rely more on solid food. Television-watching may interfere with healthy eating habits, increasing the risk of malnutrition (overweight or underweight) in the long run.

Watching television regularly could interfere with a baby’s healthy sleep patterns and bedtime routine. The issue could be profound if the baby watches television, usually in the evening. It may reduce the number of sleeping hours at night. The reason behind sleep interference could be the television content, which may keep the brain in an active state even after TV-watching is suspended. Some television screens emit blue light, which may suppress the secretion of melatonin, a hormone that regulates the sleep-wake cycle (10).

Alternatives To TV-Watching For Babies

Parents can try alternatives to TV-watching to distract the baby and indulge them in activities that can benefit them (3) (8).

Does TV-Watching Cause Autism?

There is no conclusive evidence that regular TV-watching by babies could directly cause or increase the risk of autism (12). Some studies indicate that children younger than two years who viewed less than three hours of TV per day displayed language delay and short attention span — conditions often seen in autism spectrum disorders. However, it does not conclude that the baby has autism since it causes many other symptoms, which require autism-specific assessment and screening at 18 and 24 months of age (12) (14).

Television has become increasingly readily accessible to children from a young age. Babies may invariably end up watching television if they have a sibling or a family member who watches TV often. It is vital that parents avoid TV-watching by babies from a young age to prevent it from becoming a habit. Several alternatives, such as playing with toys and outdoor games, provide better stimulation to infants’ skills, leading to timely achievement of developmental milestones.