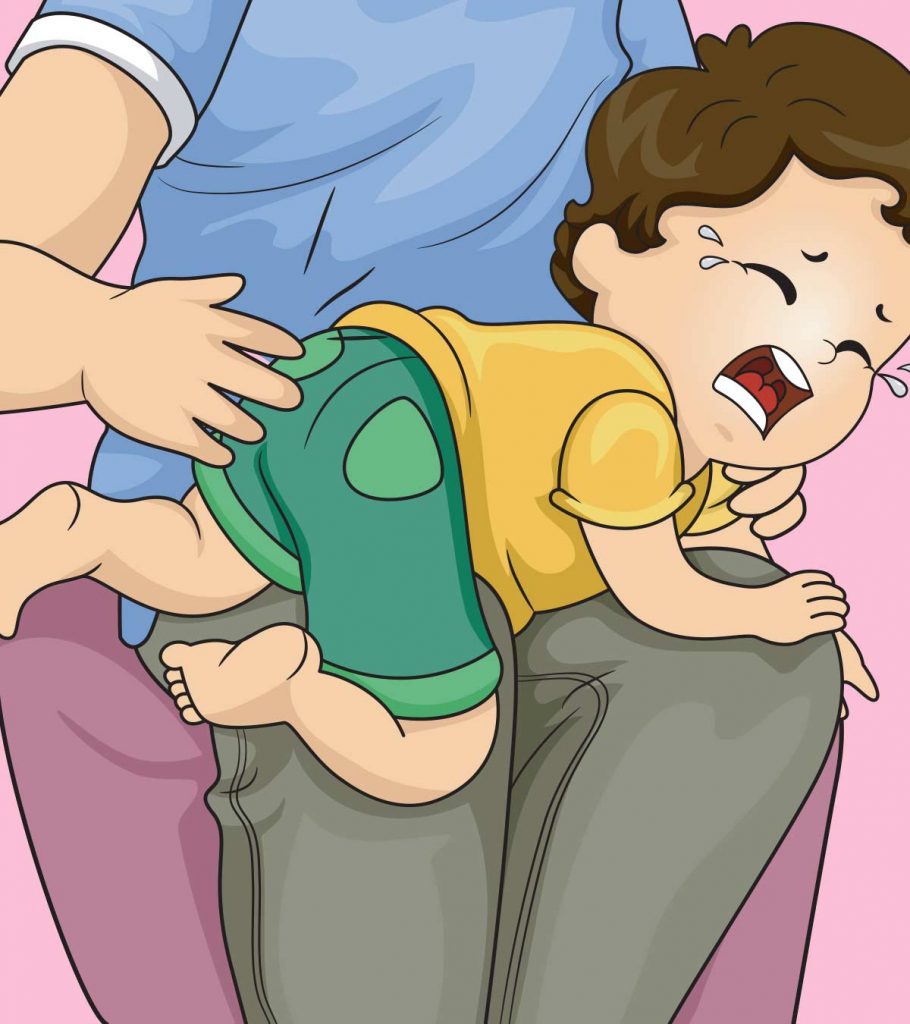 Acting out, throwing tantrums, and throwing objects are common in babies. However, such behavior might often be stressful for the parents and demand a lot of patience. Some parents might spank or hit the little one in their helplessness to control their behavior or discipline them.

Spanking a baby is the wrong technique to discipline or make a baby behave well. It can turn out to be traumatic or counterproductive and affect the mental development of the baby. The American Academy of Pediatrics advises against spanking and using other harmful tactics to control children (1).

Keep reading as we tell you the harmful impacts of spanking a baby and suggest some positive behavior reinforcement options to control your baby’s behavior.

Why Spanking Babies Is Harmful

A longitudinal study of 2,788 families with newborns conducted by the University of Michigan found that spanking babies is surprisingly common. The study found that some parents spank babies as young as one year of age (2).

Spanking may hinder the child’s physical as well as mental development. Besides, if spanking is executed out of anger or frustration by a parent or caregiver, it may cause injury to the baby. Spanking is also associated with greater aggression, depression, and other negative behavior in children (2).

Why You Shouldn’t Spank Your Toddler/ Baby

Toddlers and babies aren’t mature enough and can hardly differentiate between right and wrong. It might be unfair to use physical force and pain to make them understand things. Here are a few reasons why you should not spank your baby or toddler (1):

Babies often imitate their parents or caregivers. You may set a negative example to the little one by using spanking frequently. They would perceive it to be normal and a means to get the desired things done. There are also chances that toddlers who are often spanked may indulge in similar or more aggressive lash-outs (or bullying) with other kids in school.

Spanking during infancy may suppress the child’s personality. It may be humiliating and hurt their self-esteem once they grow older. They might grow up lacking confidence, which might further hamper their cognitive development.

Babies who have experienced spanking often might not learn the qualities of patience or self-control. They might be unable to cope up with a stressful situation or a conflict. Such kids often find it challenging to deal with a crisis or get depressed. They might also behave aggressively when frustrated or angry.

4. Can lead to serious physical injury

Impulsive spanking is physically harmful to the baby. When angry or frustrated, a parent might raise a hand or spank the child with an uncontrolled force. Spanking a physically weak baby can cause trauma.

5. Doesn’t work the way you want

Spanking doesn’t serve the purpose of the parents to promote good behavior in their babies. On the other hand, as babies mimic elders, they may learn aggressive behavior, which is the opposite of what you would want to incorporate in them. They might perceive that it is right to deal with undesired situations using physical force. This can  make them defiant and aggressive in pre-school.

6. Raises the risk of problems now and later

Spanking not only harms the baby physically, but may also leave a long-lasting impact on their mental health in the future. It can also adversely affect the parent-child relationship.

You might spank the baby in the heat of the moment out of frustration. This might lead to a feeling of guilt later on.

When Does Spanking Become Dangerous?

Parents might resort to spanking in the name of discipline. However, they should remember that it is a kind of physical abuse. Spanking may become dangerous in any of the following cases (3) (4):

If either parents or other family members display such abusive tendencies, it is dangerous for the baby. Any of these cases would require the intervention of a therapist or child protective services (CPS). In case there is any suspicion of spanking by the babysitter or teacher, they should be reported right away.

When Is Spanking Acceptable?

Spanking is acceptable in the following cases:

Doctors or nurses in the past would spank a newborn’s butt by holding them upside down to clear the fluid from the airway and initiate crying to help the baby take their first breath. Spanking has now been replaced with massaging or stroking the baby’s skin. Suctioning the fluid from the nose or mouth can also aid them to take the first breath (5).

When any food or object gets stuck in a baby’s airway, it can lead to respiratory distress. The baby needs to be held on the arm with the face facing the floor followed by five to six back spanks to alleviate the choking (6).

Thus, spanking may be acceptable in the cases of breathing or choking emergencies.

Some Effective Alternatives To Spanking A Baby

Spanking or any form of corporal punishment is ineffective or counterproductive in molding a child’s behavior. Parents should stop spanking babies and consider following a few of these age-appropriate alternatives to discipline their little ones (4) (7) (8) (9).

Never miss a chance to appreciate a good deed or conduct of the child, such as when they share a toy or snack. Praising them would encourage them to repeat the act.

3. Try to redirect their attention

Babies and toddlers usually throw tantrums if they are refused something, so diverting their attention to some other activity or toy may help. They can be made to engage in other tasks, forget the previous one, and stop crying.

Set or take a short time-out. This works well for both the parent and the baby to calm down and introspect. One minute for every year is a rule of thumb. For example, set a one-minute time-out for a one-year-old child, two minutes for a two-year-old, and so on. Toddlers above three years of age are capable of having certain rational discussions; hence, ask them to take a time-out and get back to you whenever they are ready to talk.

Preschoolers and older babies can understand instructions. Let them calm down or stop crying before talking to them. Having conversations with them makes them feel they are heard and understood. Encourage them to use words to express themselves instead of crying or lashing out.

6. Let them know the consequences for their actions

Let the baby know the consequences for their misbehavior. If they throw their toys, ask them to gather them and arrange them neatly. Older babies can be deprived of their favorite toys, playtime with their friends, or TV time if they misbehave. Let them know that every bad action will have consequences, and they will avoid repeating it.

Spanking can affect not only your baby’s mental and physical well-being, but also prove ineffective in disciplining them. You might be filled with guilt after this impulsive act. Choosing and modeling positive behavior to discipline your bundle of joy might be the best option.