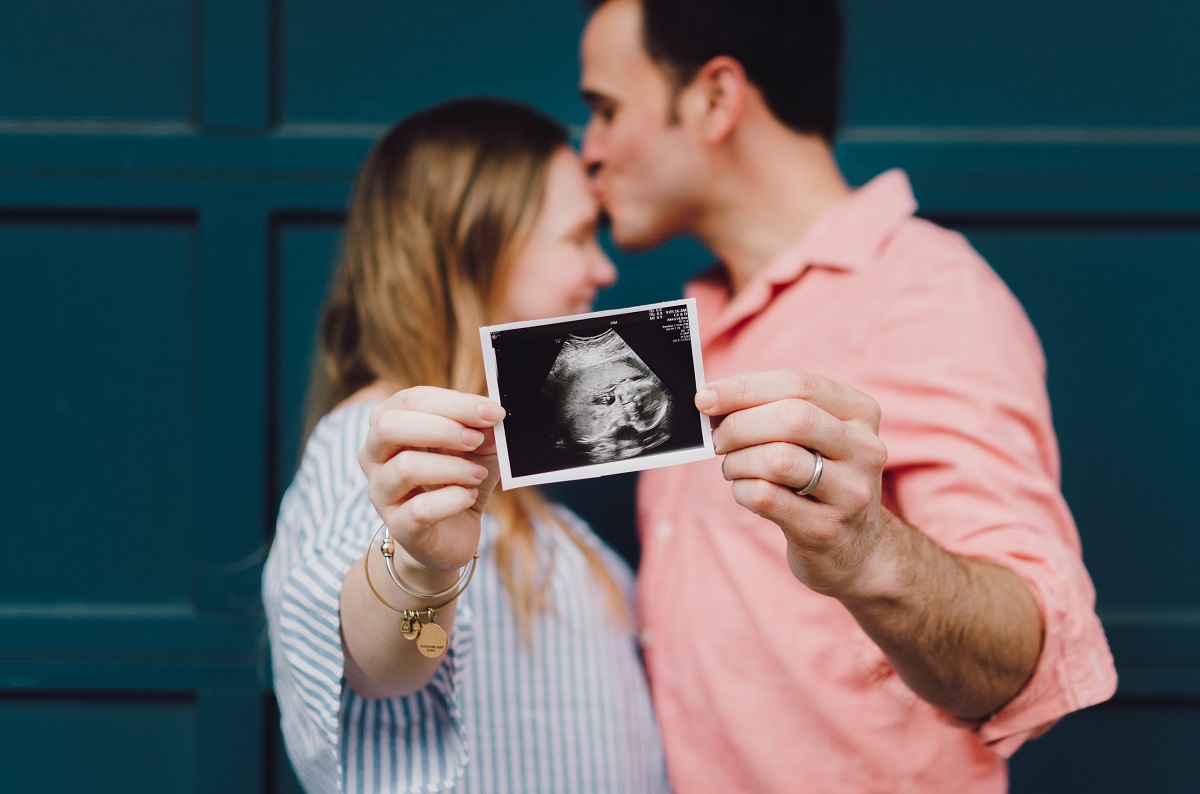 This article may include advertisements, paid product features, affiliate links and other forms of sponsorship.

The waiting game to find out if you are pregnant can be a long two weeks.   The two weeks between ovulation and a potentially missed period can be stressful and filled with anxious thoughts until you know for sure.  So, how soon can you actually find out if you are pregnant? Plus once you get a positive pregnancy test, what should you can expect at the first pregnancy ultrasound?

A missed period is usually the first sign of pregnancy. Before that women often have other minor symptoms, but those symptoms can be similar to typical premenstrual syndrome (aka PMS). Therefore it is easy to think you are not pregnant very early on even if you are. As What to Expect states the only way you will really know if you are pregnant is not based on symptoms or old wives tales, it is a positive pregnancy test or during a pregnancy ultrasound.

The time between ovulation and a potentially missed period is two weeks on average, based on a 28-32 day cycle.  Some women have longer or shorter cycles, but 28-32 days is average. Your cycle is measured from the first day of your period until the start of your next cycle. This means that there will be approximately two weeks between when conception happens and when you can find out you are pregnant or not.

Most women ovulate anywhere between Day 11 – Day 21 of their cycle, counting from the first day of their last period. This is your “fertile time” and when sexual intercourse has the best chance of producing a pregnancy. Ovulation can occur at any point during this window and may occur on a different day each month. It is best to keep track of your cycle, so you know when you ovulate and can expect your period for accurate pregnancy testing.

After ovulation, if a conception has occurred the egg will stay in the fallopian tube for 3-4 days, and then make its way to the uterus. Within 24 hours of fertilization, the egg will start dividing into cells, and when it attaches itself to the lining of the uterus, that is when implantation has occurred. At this point, after implantation of a fertilized egg, your body will start to produce HCG.

When Can You Take A Pregnancy Test?

Waiting to take that first pregnancy test can be trying for even the most patient woman out there.  However, if you take a pregnancy test too early, you can get a false negative and that is due to the low HCG levels in your body, which is what a pregnancy test detects that turns it positive. Around eight days after ovulation, trace levels of HCG can sometimes be detected early on in a pregnancy.

As stated on the American Pregnancy Association website, HCG (Human Chorionic Gonadotropin) is often called the pregnancy hormone because it is made from cells in the placenta. Typically levels can first be detected by a blood test about 11 days after conception and about 12-14 days after conception by a urine test. This is why most over the counter urine pregnancy tests say to wait till you have at least missed one day of your period.

Be prepared for a very long appointment as this will most likely be your longest appointment. There will be a slew of paperwork to fill out. You will also be asked to submit a urine sample, which will be a consistent part of your regular check-ups thereafter, so be prepared. Your doctor will also review your history and go over any questions with you.

At this time the doctor will be able to locate the baby, confirm if it is a viable pregnancy, and a guesstimate of gestation (if unknown based on last period). Your doctor will also be able to tell which ovary you ovulated from during the pregnancy ultrasound as well as confirm if it is a singleton or multiple pregnancies. This is the first picture of your baby you will get! Although, quite honestly, it just will look like a blur of cells.

The beginning of a pregnancy is a very exciting time, even if your body doesn’t look pregnant, you will start to feel different even before that positive test. During this time your body is working overtime until the placenta is complete and starts to take over. The first trimester will be a blur of anticipation, pregnancy tests, doctor visits, and a pregnancy ultrasound. All as you are enjoying your newfound pregnancy glow.

Could this treatable infection be related to recurrent pregnancy loss?
When Do Toddlers Learn Colors And How To Teach Them?
7 very real fears every mom has about having a second kid
Here’s how to know when it’s time to drop a nap
15 Best Transportation Activities For Preschoolers And Toddlers