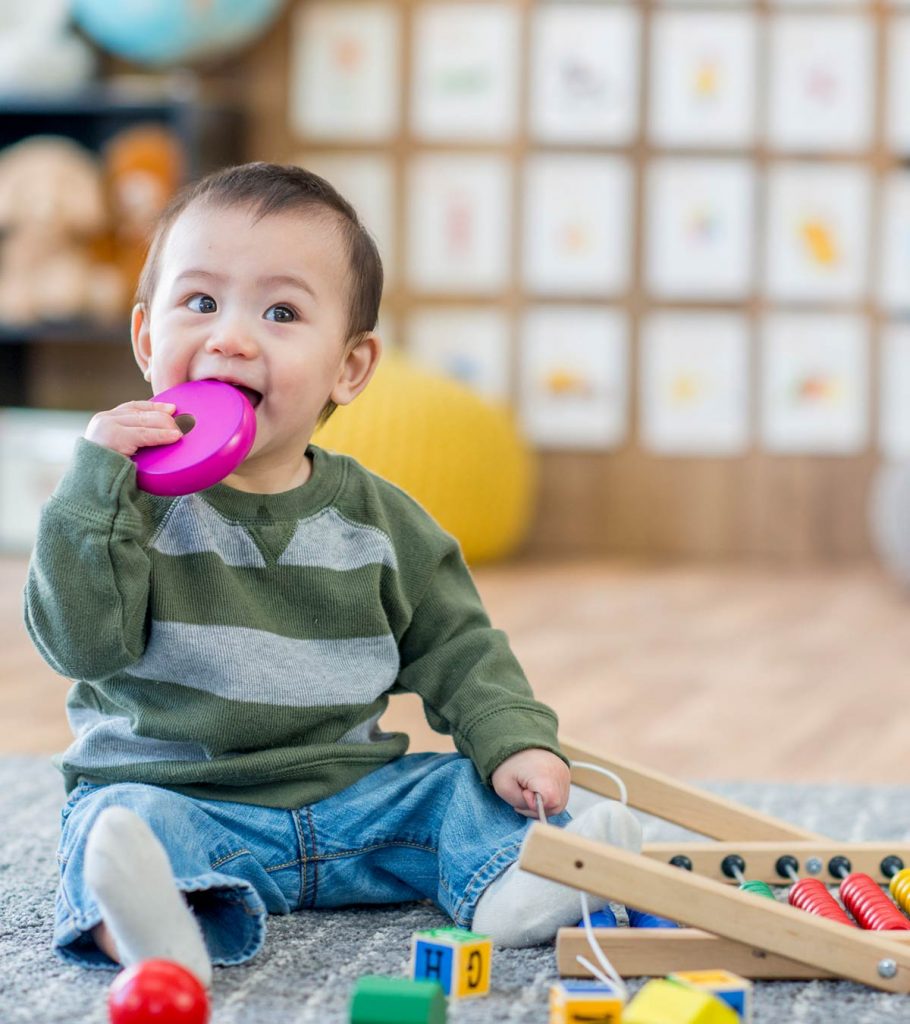 Babies try to get their hands on everything they can, and many of the objects even go into their mouths. They even use their senses for activities such as grasping, listening, touching, and sucking. This is what babies and toddlers are supposed to do and is part of their sensorimotor stage of development. As per Piaget’s Theory of Cognitive Development, children move through four different stages of mental development throughout their childhood.

Every child undergoes growth in phases, and each step is an integral part of their development. The sensorimotor skills that they develop in the first stage are crucial for the subsequent stages of development.

What Is Sensorimotor Stage In A Child’s Cognitive Development?

According to Piaget, it is called the ‘sensorimotor’ stage because the early reflexes and signs of intelligence develop through sensory perceptions and motor activities that a baby experiences. It is during this stage that infants and toddlers learn about the world around them. They do so by coordinating all the sensory experiences, such as hearing, looking, touching, tasting, and reaching out (1).

The primary learning during this developmental stage is object permanence, which is understanding that objects exist even if they are out of sight (2).

Who Was Jean Piaget And Why Does He Matter?

He postulated that as babies continue interacting with their environment, they build on their existing knowledge while retaining what they already know. They have an innate knack for adapting their knowledge as they continue to grow and develop.

The sensorimotor stage of development can be further divided into six substages that signify special milestones attained by the child:

During this substage, your newborn will respond to different stimulations with reflex acts, such as grasping, smiling, and sucking (4). These reflexes come to the baby innately and are not taught. For example, the child will show a sucking reflex when you touch the baby’s cheek lightly

The second stage is characterized by the repetition of activities that the baby finds pleasurable. For example, babies in this age group tend to suck on their thumbs, wiggle their toes and fingers, and move their legs in a kicking action. Contrary to those made in the reflexive stage, these actions are not reflex actions but are done intentionally for pleasure. Hence, they are also known as a type of pleasurable stimulation.

By this time, your baby will smile at people spontaneously, copy facial movements and expressions, respond to the affection shown to them, reach for toys with one hand, and look at the faces of people very closely. They also begin to recognize people and things even from a distance (5).

In the next four months, babies repeat their pleasurable actions, but they use objects to learn about the world. For example, simple actions like dropping a toy, banging objects or utensils, or throwing the pillow down will give them the confidence to try new actions. They are more likely to continue these activities as they find them pleasurable.

During these months, babies are also more likely to make noises of their own—laughing, making sounds to converse, or expressing their emotions. Babies also become a bit more focused on their surroundings and perform actions to elicit a response from their environment.

In this substage, babies use the basic reflexes they know and have developed in the past few months to plan and coordinate their actions. They perform these actions in anticipation of events. This ability is made possible by the prefrontal cortex’s maturation, and babies can now perform goal-oriented activities.

They know who is a stranger and may refuse to go to people they don’t know, may say ‘no,’ watch something fall, move things from one hand to another, and pick up food from a bowl to place it in their mouth (5).

Babies at this stage enjoy playing peek-a-boo and love to find hidden objects. A simple example of this is when a baby spots a toy under the table or a little away from them, they crawl to it, grab it, and most likely play with it or put it in their mouth.

It is during this substage that the child enters toddlerhood. At this age, babies will explore the world more than ever and use planning, motor coordination, and experimentation. Toddlers can now put things together that they were able to pull apart in the earlier substages. For example, toddlers can dismantle a sequence of blocks and put them back together.

It is also the substage when toddlers can understand and respond to spoken language. They also begin to use small words and phrases and are captivated by songs, nursery rhymes, and stories.

The final substage of the sensorimotor development is that of ‘symbolic thought’ or ‘early representational thought.’ According to Piaget, children begin to understand symbols that represent objects that they are familiar with. This substage acts as a transition of the child’s development from the sensorimotor to the pre-operational stage.

By now, children develop the ability to visualize objects that are not always present before them. They also observe how people around them manage their environment to achieve the desired goal and try to emulate them (3).

According to Jean Piaget, it is critical as it enables the child to develop object permanence, which is the fundamental goal of the sensorimotor stage.

Activities To Try With Your Baby During Sensorimotor Stage

A simple game of peek-a-boo is a great way to help your child learn object permanence. Take a blanket and hide your face behind it. While an infant might not initially realize that you are behind the blanket, a toddler gaining object permanence may try to pull the blanket off from your face to find you.

Similarly, try to cover your baby’s face and clap or cheer when revealing their face to create a sort of enthusiasm or excitement. As your baby grows up, you can play a full-fledged game of peek-a-boo, asking them, “where am I?” and also encourage them to hide while you seek them.

Touching and feeling things is probably one of the first motor skills that a baby learns. Encouraging tactile play can help them develop different sensations, develop their motor skills, and stimulate creativity in their growing minds. Some activities that can help in tactile play are the following.

Babies and toddlers are perceptive to a story or a song. Introduce them to books with 3D images and scenes that allow them to touch and feel textures and shapes. It is a great way to help them understand the world around them. For example, telling them about fruits and showing the pictures, followed by giving your baby the real fruit, goes a long way in their cognitive development.

You can even boost your child’s cognition with toys, such as a train engine that makes noise while it moves or a toy dog that moves when pulled with a string. It attracts your baby’s attention and develops their sense of hearing, visual acuity, recognition skills, and tactile senses.

Parenting Tips For The Sensorimotor Stage

Parenting at every stage, including the sensorimotor stage, requires you to communicate with your baby and help them better understand their surroundings and actions. Here are a few tips that can promote bonding with your child and boost their cognitive development.

Talk to your baby about everyday things, read to them, sing to them, narrate a story, or sing a nursery rhyme. These activities can increase your child’s perception of different stimuli, improve their ability to grasp new words, and improve vocabulary.

Help them learn and differentiate between two common sensory experiences, such as warm and cold sensations. You can do this by giving your baby a cold towel or object, immediately followed by a warm towel or bottle of milk.

The sensorimotor stage of development is based on the environment’s stability, building trust, looping discovery, reinforcement, and subsequent discovery. The environment around a child must be kept as stable as possible. For instance, let them understand there’s a place for a diaper change, toys go on the same shelf each night, and they should sit on a chair to eat.

Keeping their objects at the same place and using the same place for the same activity maintains a stable environment. It eventually helps the baby better understand things and object permanence. Keep their environment mostly stable while also accommodating a few alterations to encourage discovery and experimentation to boost the baby’s motor skills.

During the sensorimotor stage of development, it is essential to stimulate your baby’s five senses. You can do so by:

While it is important to expose your baby to different things around them, it is also essential to ensure a safe playing environment for your child at all times. For example, allowing your child to bang utensils or make sounds with kitchen ladles and vessels is a great idea, but you must ensure they are doing so under your supervision with no hazards around. Supervise your baby when they tend to put everything into their mouth as some objects might be unsafe.

The sensorimotor stage is a strong foundation for your baby’s developmental years. You can observe your little one and help them explore and experiment with the things around them. It is also the stage when you can bond with them and capture their first actions as a cherishable memory for life.

Halloween is on! Just follow these 6 rules to keep kids safe
Osteogenesis Imperfecta (Brittle Bone Disease): Symptoms And Treatment
Many people perceive the use of facial analytics in healthcare settings as a potential privacy threat
How to navigate breast cancer screening guidelines
15 Best Good Morning Songs For Preschoolers, With Lyrics